I'm moving along and getting things done. I've gotten my second wind after some prodding from my husband. Here is what I have so far. 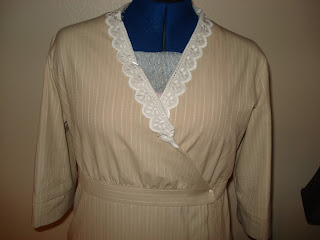 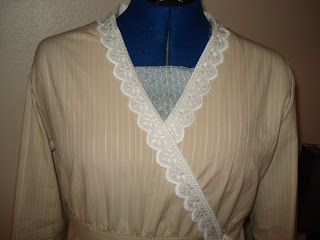 I started out thinking that I wouldn't add a collar and would instead use some lace to finish off the edge. After showing my mom the two options she pointed out that it just wasn't going to cut it. 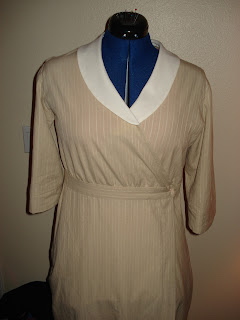 So I started out by cutting out a collar piece for the smallest size in the pattern. I pinned it to the dress and then took a pencil and drew what I wanted it to look like thus creating the collar above. It turned out alright. 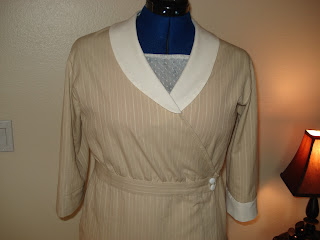 Today I took apart the sleeve at the bottom of the arm hole and trimmed the width down by 1/4 of an inch. While I was at it I removed the cuff and replaced it with the contrasting fabric. Originally I'd chosen to not do that but after I put it together it looked so monochromatic. I decided that I had to change it. 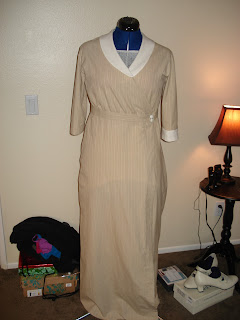 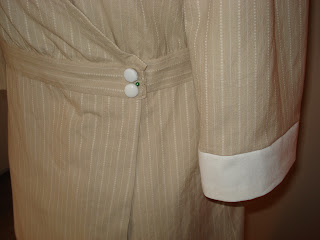 I also pinned on a few buttons to get an idea of that it will look like once I get those on as well. I'm super excited about the buttons and I don't know why.  ;) 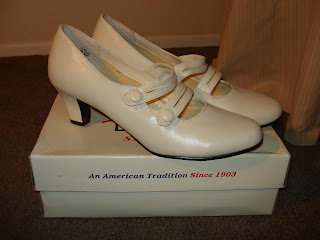 I'm sad to say I wasn't able to afford a pair of  of the American Duchess Astoria shoes. But my Mom found a descent pair that were on sale when we bought them for only $19.99. Go Mom! 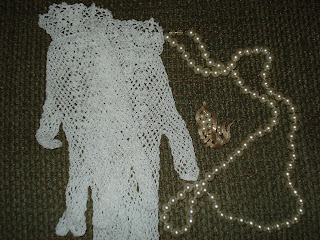 To add to things I bought some crochet gloves. I totally ditched the idea of making gloves after about the 4th pair that turned out looking like poo. The pearls and gold broach is a hand me down as well as the necklace. I haven't yet made a final decision on jewelery. And the hat situation is up in the air.
Posted by Kate at 3:02 PM

I think I'm making the same pattern as you, if in fact its a pattern, and you're not one of the fantastically talented folk that can scale it up from a book. :) I'm using Hint of History's pattern. I didn't like the shawl collar because it looked like a bathrobe, so I'm trying to figure out how to do a smaller collar too. Great idea using the smallest collar piece! I'm making my collar and cuffs with a white linen and lay some lace over it.
I've made mine from a loose woven white cotton with wide pink stripes. I'm doing snaps on the front closure but with fake buttons, then have buttons on the waistband and only 8" down on the skirt. The rest I am just sewing shut.
How lucky you are to find those shoes! I have the Astorias on order but would have bought the same as yours at the drop of a hat, and great color too!
I haven't decided on jewelry either. I'm supposed to wear mine this coming Sat for our costume guild's tour of the Titanic exhibit at Balboa Park in San Diego. so I don't have much time to make my decisions. Good luck with yours! I should have my blog written on mine early next week.
Val

Silly me. If I had gone back and read some of your earlier posts I would have seen that I recommended that pattern to you. And that you're going to the same event. :D
At least we won't be wearing the same color.
Looking forward to seeing yours on Sat.
Val

I agree with your idea of not having the buttons run the length of the skirt. I think I might just have the buttons go from the bottom up and then the buttons at the waist. I may actually sew the holes for them I'm unsure. Yes it's good we chose two different colors and that we're both customizing them to our own taste. And if anyone comments we can just tell them that super awesome minds think alike!

I'm in the final stages of finishing mine now. I just did snaps on the bodice overlap, 2 on the waistband, & 6 down the skirt. The buttons are pink. I used your idea of cutting a smaller version of the collar, did it in white linen, and the cuffs, and put 3 pink buttons on either collar and 2 on the cuffs to give them more color.
BTW, what brand are your shoes? I can't tell from the box.

I'm not trying to hog up your blog, but if you're on Facebook, I have a Costume Pattern Review page there you might be interested. We also have one for the San Diego Costume Guild.